Home / Motorsports / The King and I

The King and I

41 years ago today, on July 1, 1979, I attended my first NASCAR event. It was qualifying day for the Firecracker 400 at Daytona International Speedway.

I went with my father, who to be honest, was doing it to placate his 12 year old son’s obsession with racing, especially Richard Petty. Oh, how I adored The King as a kid. When he won the Daytona 500 earlier that season (you know the one with the famous fight between Cale Yarborough and the brothers Alison), my love of the sport was taken to a new level. I took to listening to races on the radio when my sketchy AM radio could pick up WGTO all the way in Tampa. I was gleaning whatever scarce information I could from local papers and Stock Car Racing magazine.

So when my dad produced a brochure for the 1979 Firecracker 400, I was beyond stoked.

We had two tickets for the actual race, which was to be held on July 4th, a Wednesday morning. But as we were visiting relatives all week long, I think my dad wanted an excuse to get away. So on that Sunday, we headed over to the track for qualifying.

My dad was a thorough planner, so of course when we arrived at the track, we headed over the the DePalma grandstand to see where our seats were for Wednesday’s race. A dry run of sorts.  I can vividly remember walking up the walkway that first time. It was like a movie, because as luck would have it, framed there before us as we first saw the track was Richard Petty’s STP Oldsmobile sitting on pit road. My knees were quite literally shaking. Practice was going on and the sound just ran through me like nothing had before. People will tall you when they go to a race for the first time, it is the sound that gets you.

It stands as one of my most potent memories, that day. The colors, the sounds, the smells. I remember how bright Petty’s car was in person – that STP orange was florescent! The only thing more impressive was when we actually clinged to the fence (something they don’t let you do now) as cars roared by us at nearly 200 MPH. 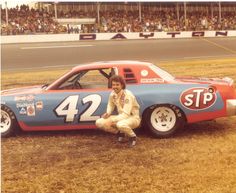 Kyle Petty and his Dodge Magnum, 1979

I was also excited because it was to be young Kyle Petty’s first attempt at qualifying for a Winston Cup Grand National race. It didn’t go so well. Kyle Petty holds the distinction of being the first racing driver I saw crash in person. He crumbled up his Dodge Magnum off of turn 2. I was really bummed about that.

All of these memories come back pretty readily. They helped to form the foundation of my lifelong love of NASCAR and motorsports in general. But something else came back to me a couple weeks ago when Bubba Wallace, the Confederate battle flag and race became a topic in NASCAR. It was something at the time I didn’t think much of, but now it kind of completes a circle for me.

When we were watching qualifying, my dad and I sat in the DePalma grandstand as I mentioned. There were a smattering of fans in attendance, but it was nothing lie the crowd that would be there for the race on July 4th. Of course, I had been to the souvenir stand and purchased on of those bright, cake-like trucker caps colored like Petty’s car with a patch sewn on the front of it. They were the mainstay hat style in NASCAR at the time. I had a program, and as each driver whooshed by I studied what I could about the driver in the program, used the handy dandy time to speed conversion chart in the back and was generally absorbed.

Then my dad quietly pointed out another group of fans sitting nearby, a couple of rows in front of us.

“That’s something I am really surprised to see here,” said my dad. 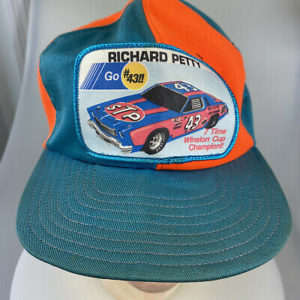 The family of four was African-American. My dad’s remark wasn’t meant to be racist in any way – just an observation. My dad’s lessons on race were ingrained into me since I was little, how we are all equal, regardless of skin color. His remark was more about how such a Southern, white sport wasn’t generally inclusive when it came to black people. Even at 12, I got what he was saying.

Upon further observation, I came to realize I had something important in common with the family: They were Richard Petty fans, too! Decked out in hats and shirts – hell, I was jealous because all I had was the hat (Dad could be frugal). When King Richard zoomed by on his qualifying lap, they all stood and waved him on, cheering loudly. I can still see this in my mind’s eye, clear as the July day on which it happened.

It is now July 2nd, which is incidentally  Richard Petty’s birthday. I think he’s 83 this year. He’s surely seen a lot over the years. I wonder if he could have ever imagined that an African-American driver would be the point man of a new, inclusive age of NASCAR while piloting his famed number 43. I know 12-year old me never would’ve believed it.