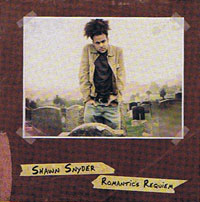 There is nothing quite like the moment when a project’s promise is fulfilled. Two years ago when I first met Shawn Snyder, I had no idea that an offhanded comment like “you know, one day you should come record at my studio” would become this. Yet here it is, empirical evidence that passion can be harnessed and resolve rewarded. In my hands, I hold a copy of Shawn Snyder’s new CD, “Romantic’s Requiem”.

This project began with some rough sessions back in February. What were initially demo tracks became the real deal, settled on through a comparative game we invented called “Soul or Phlegm?” where takes were evaluated and either kept or trashed. In some cases, entire songs were thrown out and later recorded during our Summer session that took most of August to complete.

The parade of guest musicians was seemingly endless, each producing it’s own magic most of the time. In most cases, these sessions were one-nighters where the musician would give us several takes which were then edited into a fluid performance. Interesting results came from this, with musicians who had never met each other melding their  parts together as if they were in the same session. This is particularly evident in the song :I Wrote Songs” where Aaron and Allison, who never met each other in the real world, weave threads of guitar and violin together into a rich, dark tapestry.

The final bit of blessed goodness was the intervention of Dom Flores. Dom is one of those musical masterminds who understands not only music, but SOUND. He took our screwed up, haphazardly engineered project and melded it into a fully mixed sound that really brought the whole thing to life. It shimmers, it sings. Best of all, it sounds like we kinda knew what we were doing.

What does it sound like, this Shawn Snyder thing? I say a mix of Paul Simon and Bob Dylan with a dash of soul like Ben Harper. But check out some for yourself. Here is the aforementioned I Wrote Songs as well as one of my favorites, Graduation Day (I have a MEOW solo in this one!). If you like it enough to support the worthy endeavors of a budding artist (and all around nice guy), email Shawn here and buy a copy. Or visit www.shawnsnydermusic.com for more details.

Also, make plans to attend the CD release show for Romantic’s Requiem on November 16… again, see his site for details…