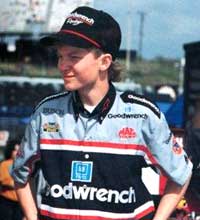 Last night, I finally got a chance to check out the big screen racing documentary “Dale” featuring the life of the late Dale Earnhardt. A real “sticky” treat, if you get my meaning. One of those gems in cinema where you find yourself reflecting upon it over the hours, days and perhaps weeks that follow. It “sticks” with you.

The film is comprised of footage and interviews with Earnhardt and those in his life on and off the track. The director chose a seminal moment in Earnhardt’s career, his long-awaited triumph in the Daytona 500, as the framework to hang the story of his life on. As the documentary progresses through Dale’s life as told through interviews with the likes of Theresa Earnhardt, Richard Childress and Darrell Waltrip, it jumps back to the broadcast of the 1998 Daytona 500 creating a nice parallel between the arc of the racing hero’s life and the race itself.

The Earnhardt racing footage is fantastic. My two kids are too young to really have seen Earnhardt race; all they have are the stories from their old man. But here it was, on the big screen, Earnhardt man-handling his car and the competition. Jeez, I’ve forgotten what an absolute bastard he was on the track! Fender banging with the likes of Tim Richmond, Waltrip, and Bill Elliot, tearing up sheet metal, driving like a hero and making everyone just a little mad. Vintage stuff that I’m glad that I got to share with my kids.

One of the things I really didn’t realize was how close Earnhardt was with broadcaster Steve Burns. I like Burns, but apparently Earnhardt did too. There is some great footage here of the mischievous Earnhardt, the inner 8-year old, mugging for the camera and just plain old messing with Burns. He nearly kills the guy with a bulldozer and cackles while doing it. The stories here are rich and go a long way to softening the edge of “The Intimidator” as we have known him.

Dale Earnhardt Jr. is the other story in this documentary, and whether by design or not, the story of his relationship with his father is the real “sticky” part of the film for me. There are some powerful moments here with Jr. remembering his hero. The footage of Jr. as a little kid at the race track dressed in the colors of the Goodwrench crew, looking worshipfully at his father in victory lane is touching and sad. Here was this little kid, so close to his father, yet so far. His present day interview for this documentary was obviously draining, his eyes red and tear-filled throughout. If you doubt whether this guy is the real, genuine human article, you must see this film. Then you’ll probably understand why he is the most popular racer in America.

I was pleased to find this film wasn’t real redneck. What I mean is that, although true to the rural, southern blue-collar roots of his life, the documentary itself wasn’t filtered through the swollen eyes of beer-swigging Talladega infielders. He fishes, he farms and gets his hands dirty, but thankfully there is no hunting footage. Last thing I needed was to apologize to my wife for the deer-killing scene.

A curious omission to me was Neil Bonnett. The late Bonnett, a NASCAR star in his own right, was as close to Earnhardt as anyone was, and I can’t figure out for the life of me why there was absolutely nothing in the film about their relationship. That ESPN movie “3” had this relationship as a central part of their tale, but it was totally absent here. What gives?

We all know how the movie ends. As a fan, I gotta say his death was handled perfectly in this film. They show what happened, they interview everyone about it, even his mother. Enough time has passed that even Chocolate Meyers seems to be stronger for it. Of course, seeing Harvick win at Atlanta 3 weeks later still has a healing affect, as does the knowledge that many drivers have been saved by the safety innovations created in the wake of his accident.

If you are a Dale Earnhardt fan, you must see this. It should be mandatory for any NASCAR fan that came on board in the last 10 years. I’m objective enough as a race fan to realize that there are other drivers like Jeff Gordon who will statistically eclipse Earnhardt. But his career and life were kinda like this movie: Simply epic.