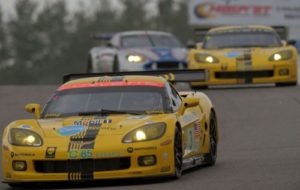 You all know I am a big advocate for the idea of “green” racing, specifically, using racing as a platform to accellerate the various technologies that can help us live in real life more efficiently and intelligently. No matter your stance politically, the idea of an “Energy Technology” based economy may be one of the only real answers we have to our current economic condition, and racing is the perfect place to develop many of the fuels and technologies that can get us there.

The American Le Mans Series at the beginning of the year announced the idea of “The Green Challenge”, a inner race competition in part sponsored by the Energy Department, the EPA and the SAE. It is open to any team entering cars that run on “Green” fuels, i.e., clean diesel, E10 ethanol or cellulosic E85. The competitors will be ranked by how much fossil fuels they use and how many emissions they produce over the course of the race distance.

This weekend marks the first running of “The Green Challenge” at the season ending Petite Le Mans at Road Atlanta. Current entries into the Challenge are Corvette RRacing (running on the E85 cellulosic) and the awesom Audi R10 TDI entries that have revolutionized the prototype class with their high torque, low noise turbo diesel power. Word is that there are at least two manufacturers not currently competing in the American Le Mans Series who are interested in joining the series in 2009 mainly due to the attraction of the Green Challenge, which will be a part of every race on the ALMS schedule in 2009.

I couldn’t find any information on an actual prize being awarded for winning the Challenge, but I imagine that the manufacturers are really interested in bragging rights at this point. NASCAR really needs to pay attention here. The IRL is already on ethanol, and this kind of move puts manufacturer relevancy on the front burner. Consumers may actually start to pay attention to which badges lead this technological revolution, and that may return racing to it’s rightful place as a test bed, and as a “win on Sunday, sell on Monday” marketing platform.

More information on the Corvette program, and some quotes from Doug Fehan, who was on Windtunnel last Sunday night, can be found here.