By now you realize that much of the OTHER WORLD COMPANION exhibit centers on creating unique moments in time that can’t be repeated. We are stressing the idea that this art is not designed to be consumed on demand – it is a constant live broadcast that the listener enters into and experiences simultaneously with others. Each live drop is chronicling a moment in time and space that will not be replicated. We call this “The Collective Now”. It’s that thing when you’re young and you look up at the moon and you wonder if your loved-one many miles away is also looking up and seeing the same moon. 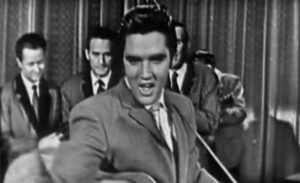 “The Collective Now” is a deepish concept that I actually want to tackle in a separate post here. Suffice it to say I’ve probably spent way too much time on it.

To dive into it: Historical speaking, humanity doesn’t have much experience with “The Collective Now”. It is really an advent of technology. But as soon as the radio came into being, thousands, then millions of people began to experience shared moments across vast distances. Whether it was live music, a sports broadcast or fireside chats – more and more humans were sharing a “now”. Television brought this into sharper focus, with common experiences ranging from pop-culture events like the early sitcoms, Elvis’ censored hips and those four lads from Liverpool performing on Ed Sullivan.

(Note: Please excuse the American-centrism here. We can only speak form the standpoint of where we live, but we imagine similar moments were shared relatively across the globe, touchstones in the collective experience. The specifics may have been different in other places, but technology certainly helped to shrink the distance between peoples during this time period.)

The pinnacle moment in this “Collective Now” was probably the Apollo moon landing in 1969. Whether you believe it actually happened or not is beside the point. Truth is, at that moment the entire world collectively held their breath as Neil Armstrong walked on the moon for the first time.

Man landing on the moon – a global “Collective Now” experience.

Since that moment, the same technology that created “The Collective Now” has served to shatter it. What was once (in the U.S.) only three national broadcast networks became a collection of cable television stations. Then satellite television brought us hundreds of choices in programming. Now with the internet, the world, past and present, is at our on-demand, streaming fingertips. Only a few sporting events like World Cup and maybe the Olympics create those global, live, shared collective moments. That and the random big news event. Otherwise, we are on our own, in our own individually tailored, binge-watching experiences with all the side-effects that come with it: Loss of common experience, loss of common touchstones and, it can be argued, a loss of empathy.

Do not mistake OTHER WORLD COMPANION as a statement for or against this devolution of ” The Collective Now”… that is not the intent or purpose of the exhibit. It just shines light on it as we evolve into whatever it is we are becoming. Maybe a last stab at trying to force connections that can never be again and create some unique moments in a society that is more and more on-demand.